With the markets in free fall, promoters have been compelled to pledge more shares as collateral against funds borrowed, data compiled from Capitaline shows.

Promoters of 36 companies were required to provide additional shares worth Rs 1,863 crore to lenders. For a sample of 37 companies, the pledged shares went up to 64.3% of their stakes, an increase of 54 bps since the end of September. .

Such a sharp jump in additional pledges is probably a function of margin calls getting triggered, market watchers said. With the benchmark Sensex ending with losses in eight out of the last eleven sessions and losing over 6% since November 8, the combined market capitalisation of these firms has seen an erosion of over Rs 35,000 crore. 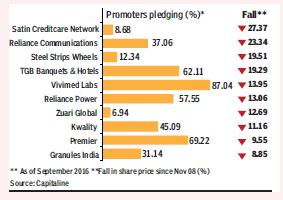 For instance, the promoters of Satin Creditcare pledged an additional 7% of their equity over and above the existing pledging of nearly 9%. The share prices of micro financier had slid over 27% in the last couple of weeks. Similarly, Vivimed Labs which had 87.04% promoter pledging at the end of last quarter pledged an additional 1.7% of promoters’ equity. The promoters of two Anil Ambani Group companies Reliance communications and Reliance power also pledged 6.4% and 3.8% respectively in the same period.

“The increase in pledging activity can be purely attributed to the recent market correction, in most of the cases the promoters have already pledged majority of their holdings and the fall in share prices have necessitated to bring in additional equity to cover the erosion” Observed A K Prabhakar, head of research at IDBI Capital.

While promoters of Rajshree Sugars pledged almost the entire holding, Videocon Industries and Gayatri Projects have pledged 98.8% and 94.05%, respectively as of the quarter ended September.

Rupee hits all-time low of 80.70 against US dollar since Feb 24th