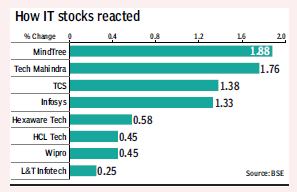 Although the rupee hit a new low on Thursday against the dollar, IT stocks barely reacted gaining just between 0.8% and 2%. Mindtree’s shares were up around 2% during Thursday’s trading session followed by Tech Mahindra whose stock was up around 1.7%. Stocks of other IT firms like Tata Consultancy Services (TCS), Infosys, Hexaware and Wipro barely budged. The Indian rupee on Thursday hit a lifetime low of 68.86 in intra-day trades against the US dollar due to a strengthening of the dollar against virtually all currencies.

The BSE IT index ended the session at 9,434.05, up 114.78 points or 1.23%, while the Sensex closed at 25,860.17, down 191.64 points or 0.74%. Shares of Mindtree have gained around 4.5% in the week so far, followed by TCS and Tech Mahindra whose shares have gained 2.65 and 2.4% in this week so far. Analysts at Kotak recently said, “Indian IT is better-prepared to manage potential changes courtesy increase in local hiring, local acquisitions and continued increase in US wages. On a relative basis, HCLT and Wipro have lower risks than Infosys and TCS.”

Stock Radar: Buy this FMCG stock to gain profits over 10% in next 5-6 weeks